The transmission of disease between humans and pets is very rare.  For example, we don’t see our pets catch the same cold that we do.  In fact, when was the last time you went to the doctor to be treated for canine distemper? It is however, true that pets are increasingly sharing diet-related diseases with humans.

For example, diabetes in pets is on the rise, some even call it an epidemic. According to the Banfield State of Pet Health 2011 Report, since 2006 there’s been a 32 percent increase in canine diabetes, and a 16 percent rise in diabetes in cats. “Likely those numbers are indeed higher, particularly in cats,” says Dr. Jeffrey Klausner, chief medical officer at Banfield. “That because so many times pets with diabetes show no symptoms, or only very subtle symptoms, or owners don’t know what to look  for.”

So what is behind this increase in pet diabetes?  Like humans, pets have a pancreas that produces enzymes that aid in digestion, and insulin that helps to convert blood sugar levels from digested foods to energy.  Insulin also allows us to store the extra energy from blood sugar as fat.   Like humans, excessively high levels of blood sugar can lead to a premature failure of the pancreas to produce insulin.  This condition is known as diabetes.

So, when considering the epidemic of diabetes in pets, we are forced to consider what has changed in the pet food ingredient world since 2006.  The answer to this is the introduction of so called “Grain-Free” foods to pet store shelves.  The increasing assumption by consumers over the past decade is that grain is bad for pets, and “grain-free” pet food must therefore be good.  Unfortunately, most of the grain-free diets that have come on the market simply substitute white potato for grain.

Dr. Elliot Harvey, founder of Great Life™ Pet Foods recognized the problem of high glycemic levels in pet food over 20 years ago.  As a result, he has always formulated low glycemic pet foods in both “unique grain” formulas and grain-free offerings.  In his Great Life™ and Pioneer Natural™ brands of food, he combines Oatmeal, Pearled Barley and Brown Rice to create a low glycemic grain-based food.  For a healthy grain-free option, he combines Jicama ( a very fibrous root) which is a “2” on the Glycemic Index with Tapioca to achieve a certified low-glycemic food.

The kindest thing we can do for our pets may be to feed them less like a human and more like a dog or cat.  The next time you go shopping for your pet, simply choose either a Great Life™ or Pioneer Naturals™ low glycemic pet food, and be confident you are doing what you can to help prevent your four legged furry family member from becoming another statistic in the growing epidemic of pet diabetes.

“Our dog loves the food. Has for years, since Dawn and Ed sold in a small store close to our home. Thanks for the special deal. He loves the garlic bagels!” 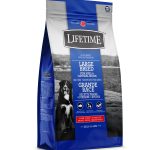 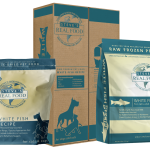